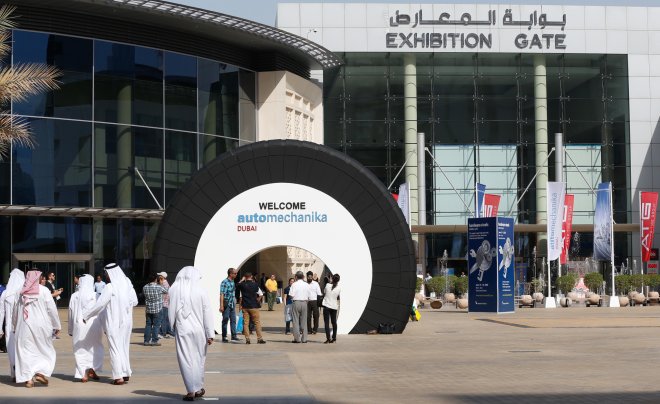 Automechanika Dubai 2017, the 15th edition of the premier trade exhibition for the automotive aftermarket in the wider region, came to a close, attracting 28,839 visitors from 134 countries. Trade buyers and industry representatives were on the lookout for new suppliers, fresh product ideas, spare parts and essential equipment. Among the highlights of Automechanika Dubai 2017, which featured 1,955 exhibitors from 57 countries who took 69,089 sqm of exhibition space, was the spate of regional and global product launches by exhibitors from across the world, looking to make a major impact in the regional marketplace.

It also featured the Automechanika Academy, where the latest updates about Dubai’s auto aftermarket trade were revealed. According to Dubai Customs, the emirate’s trade for auto spare parts and accessories was valued at AED39 billion in 2016, comprising around three per cent of Dubai’s AED1.28 trillion worth non-oil foreign trade for the year.

Around two million tonnes of auto parts, engine components, tyres, batteries and systems were imported, exported, and re-exported to neighbouring countries last year. Japan topped the list of Dubai’s trading partner countries, accounting for 5.8 billion worth of imports and exports for the year – six per cent more than in 2015.

Exhibitors from these countries were also prominent at Automechanika Dubai 2017, spearheaded by Germany. A total of 116 leading German aftermarket brands occupied 3,000sqm at the Dubai International Convention and Exhibition Centre, a 15 per cent increase over the previous year, while 107 of these were part of a government-backed German Pavilion.

The strong turnout from the international trade reinforces the decision by leading global players to continue investing in the Middle East and Africa, as they showcased their innovative automotive technologies across six product groups of Parts & Components; Electronics & Systems; Repair & Maintenance; Tyres & Batteries; Accessories & Customizing; and Car Wash, Care & Reconditioning.

Among the notable exhibitors that launched new products and services into the region were:

• Vipal (Brazil), who launched a tyre repair line using materials such as aramid fibers, a reinforced textile used in bullet-proof vests, along with automotive armouring with resistance that is five times stronger than steel.

• Satbir International (UAE), launched a brand of tools from Germany for Vehicle detailing, called “TORNADOR” that make life easier for the person doing the detailing providing a better finish and saving time and effort.

• Autopstenhoj from Germany launched a hydraulic in ground lift with a very flexible swivel arm construction and a complete range of surface mounted lifts including its new generation of electro-hydraulic lifts.

Automechanika Dubai 2017 also featured two insightful conferences providing a deeper understanding into the next step for smart and connected mobility, and the future direction of the regional aftermarket sector.