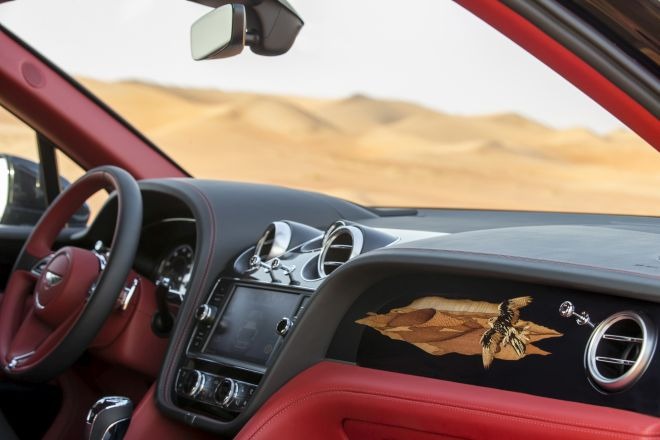 Bentley has created the ultimate accessory for the falconry enthusiast, with the new Bentayga Falconry by Mulliner. Hand-crafted by Mulliner – Bentley’s personal commissioning division – the Bentayga Falconry features a bespoke installation in the rear which houses all the equipment required for an enjoyable falconry expedition.

At the heart of the Bentayga Falconry by Mulliner are two individual natural-cork-fabric-trimmed units – a master flight station and a refreshment case. These sit on a movable tray that allows for easy access. Inside the master flight unit is a special Piano Black veneered drawer – with a Saker falcon crest – containing GPS tracking antennas, tools, tethers for the birds and a 3.5″ wooden handled Buck Knife. Beneath this is a laser-embossed Hotspur hide stowage tray with individual compartments for the GPS bird tracking unit, binoculars and hand-crafted leather bird hoods and gauntlets. The refreshment case houses three metal flasks and durable cups, a blanket and refreshing face cloths.

Two individual perches are stored in a special natural-cork-fabric-trimmed case which slots into a hard pocket built into the side of the boot. A boot-floor and rear-sill protection cover – also in cork – is discreetly integrated into the rear of the Bentayga. Using this reversible feature in conjunction with the in-car perch, falconers can prepare their bird in comfort and shade.

Inside the Bentayga’s Hotspur-hide-trimmed cabin, there is a removable transportation perch and tether on the central armrest, and an exquisite example of Mulliner’s skill with marquetry. The sweeping desert scene – featuring a soaring Saker falcon – was created using 430 individual pieces of wood sourced from all over the world and hand-crafted over nine days. No two Mulliner veneers are the same and the skill demonstrated by the Crewe-based craftspeople comes initially from selecting exactly the right piece of wood for its unique qualities, such as the speckling of Lacewood that mimics the rippling of the windswept desert.

In the depiction of the falcon itself, the vanes of each individual feather are achieved by cutting the shape from specific veneers. Sand shading (a classic hand-crafting technique which enhances definition) adds a darker gradient to the tips of the wings, creating shadow and the illusion of depth. Each of the 430 pieces used in the Saker falcon marquetry inlay have undergone four separate processes of cutting, sand shading, pressing and double cutting – before being assembled by hand over nine days. Before the finished inlay is pressed and lacquered, checks are made under magnification to ensure that the fit of each piece is perfect and that aesthetically the grain direction and sand shading are even and consistent. Woods from all around the world were used to create the piece including Chestnut, Eucalyptus Pommele, Holly, Lacewood, Maple, Olive Ash and Ripple Sycamore.