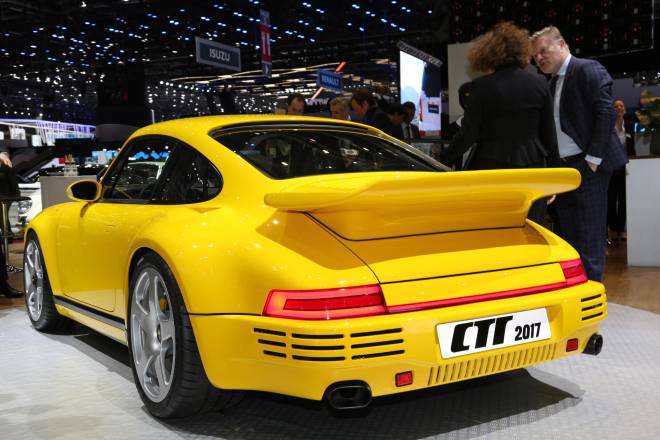 Ferrari kicked off its 70th anniversary with the world premiere of the 812 Superfast. Powered by a new 6.5L V12, the 812 Superfast is Ferrari’s most powerful production car yet. It is also the first Ferrari to introduce Electric Power Steering which, in line with Ferrari tradition, is used to fully exploit the potential of the car in terms of performance. The introduction of the Virtual Short Wheelbase 2.0 system (PCV) combines the electric front-wheel steering assistance with the mechanical concept based on tyre dimensions and the rear-wheel steering. The two examples of the 812 Superfast on display feature new colours – the special celebratory Rosso 70 Anni and Grigio Caldo Opaco.

France’s answer to the Porsche 718 Boxster/Cayman twins and Italy’s Alfa Romeo 4C is the Alpine A110, powered by a turbocharged 1.8L Renault engine. 252hp is sent to the rear wheels via a 7-speed dual-clutch transmission; 0-100km/h is said to be despatched in 4.5 seconds. Production of the lightweight sports car will begin soon, and we’re keeping our fingers crossed!

Revered sports car manufacturer RUF Automobile GmbH unveiled the latest generation of its famed CTR halo car at the 87th Geneva Motor Show. Entering its fourth generation, the latest high-performance RUF supercar pays homage to the 1987 CTR Yellow Bird in both form and function. A weight-to-power ratio of only 1.6kg per horsepower, a first-ever rear-wheel drive bespoke carbon fiber monocoque chassis and an incredibly powerful engine are only some of the ingredients that make the latest CTR such a compelling work of automotive art. Design inspiration comes directly from the 1987 Yellow Bird’s focus on aerodynamic efficiency. The silhouette, narrow body, rear air inlets and fascias are all direct nods to the company heritage. The body, now formed in carbon, calls back to the original car’s flushed look. Center-locking 19″ forged alloy wheels complete the design wrapped in tires measuring 245/35ZR19 in the front and 305/30ZR19 in the rear.

Underneath the carbon-fibre skin is a bespoke monocoque carbon-fibre chassis. The 2017 CTR uses a rear-engine powertrain layout; the 3.6L twin-turbo flat-six is built by RUF and uses a dry-sump lubrication system to provide constant oil supply and pressure during extreme cornering. Total output is 710hp and 880Nm of torque, allowing acceleration from 0-100 km/h in under 3.5 seconds and 0-200 km/h under nine seconds. Top speed is 360 km/h. In order to truly pay tribute to the Yellow Bird, the latest CTR will be available exclusively with a newly-developed six-speed manual transmission that sends power to the rear wheels through a limited-slip differential. Ensuring excellent handling characteristics, the 2017 CTR uses double-wishbone suspension arms in a pushrod configuration for both the front and rear axles. Internally vented and perforated carbon ceramic brake discs (380 mm front, 250 mm rear) clamped by six-piston fixed calipers (front) and four-piston calipers (rear) offer maximum stopping power and enduring fade resistance.

Pagani’s Huayra Roadster project began in 2010, with the idea of a Huayra Coupe with a removable roof and conventional doors, as was developed for the Zonda Roadster in 2003. From the very beginning, the Huayra Roadster door design followed in the tradition of the Mercedes-Benz models of the 1950s, specifically the gullwing doors of the 300SL, and its Roadster variant featuring conventional doors. The Mercedes-Benz AMG 6.0L V12 sends 764hp to the rear wheels through a 7-speed automated manual.

The Scuderia Cameron Glickenhaus SCG003S has evolved directly from a true race car, the SCG003C, that competed to a series of endurance races including the famous Nurburgring 24 Hours where it finished first in class. Promised to be the fastest cornering road legal car in the world, its advanced aerodynamics will generate net downforce in excess of 700kg at 250km/h. Top speed will be in excess of 350km/h, with 0-100km/h covered in less than 3 seconds. The car is hand-built in Italy by bespoke manufacturer Manifattura Automobili Torino, using an integral carbon fibre chassis powered by a 4.4L twin-turbo engine that develops in excess of 750 horsepower and 800 Nm of torque. The display car features a light blue suede refined racing style interior derived from the Nürburgring 24 Hours Class winning SCG003C and boasts a shade of blue transparent finish on its all natural carbon fibre bodywork. A racing rear wing has been fitted while the racing suspension has been given a slight road tuning. The SCG003CS is equipped with 19″ front and 20″ rear wheels and special Dunlop road tyres.

The new 720S made its global debut, introducing the second-generation of McLaren’s Super Series. The unveiling of the new supercar confirms both the 720S name and 720hp of the first model in the second-generation McLaren Super Series. Lighter, faster and more visually exciting than its 650S predecessor, the 720S has no radiator intakes on the side; this function is carried out instead by the unique ‘double-skin’ aerodynamic form of the dihedral doors, which channel air to the high-temperature radiators that cool the mid-mounted twin-turbo 4.0L V8 engine. 0 to 100km/h takes less than 3 seconds and just 5 seconds later the car has passed the 200km/h mark on its way to a maximum speed of 341km/h.

Appearing a far cry from the compact, fun Hondas of yore, the latest Civic Type R looks all butch and blingy. The 2.0L turbocharged VTEC engine has been revised t now make 320hp and 400Nm of torque. Throttle response and driveability have improved thanks to optimised engine control settings, while the six-speed manual transmission is further improved by a rev match control system. The front Macpherson strut suspension of the standard hatchback is revised with new geometry to minimise torque steer and maximise sporty handling. At the rear, the new independent multi-link system of the standard car is improved with the use of unique high rigidity suspension arms. An enhanced selection of driving modes give the car greater usability compared to the previous Type R. A new ‘Comfort’ setting sits alongside ‘Sport’ and track-focused ‘+R’ modes. Each selection tailors the adaptive dampers, steering force, gear shift feeling and throttle response of the car on demand.

The Mercedes-AMG GT C Roadster is is the additional high-powered variant of the AMG GT, whose 557hp generated by the familiar 4.0L V8 engine places its performance between that of the GT S and GT R. Width-wise it resembles the top-of-the-range GT R, and comes with adaptive, infinitely variable damper control. The GT C further adds to the standard model’s capabilities by fitting a number of enhancements that surpass even the GT S coupe, because they’re taken from the GT R. They include rear-wheel steering, which turns the rear wheels in the opposite direction of the front wheels at lower speeds, and in the same direction at 100km/h and above, to enhance agility and high-speed stability. The GT C roadster also comes with a weight saving lithium-ion battery, an electronically controlled limited-slip differential, revised 7-speed dual-clutch automatic, and an additional Race mode on the drive mode selector.

Bentley attempts to define the electric luxury segment with the EXP 12 Speed 6e concept, which promises a no-compromise approach to the quality, refinement and high performance levels expected of the luxury brand. Typical Bentley characteristics such as the effortless surge of torque and grand touring range will be combined with new high performance technology such as rapid inductive charging and state-of-the-art on board concierge-style services for an effortless ownership experience. A fusion of cutting-edge technology and beautiful materials is evident right throughout EXP 12 Speed 6e’s luxuriously appointed cabin, ensuring that the brand’s use of technology is not cold or emotionless. The entire central console, for example, is hewn from a solid piece of curved glass encompassing a high-definition OLED screen. All of the car’s principle onboard controls are accessible from here, including navigation, entertainment and climate control. Handmade, cut-glass sections on the steering wheel contain the controls for media, communications, navigation and car set-up. There are also two buttons featured at the top of the cut-away steering wheel, one offering an instant performance boost and the other the ability to limit speed, in urban areas for example.

On the outside, the iconic Bentley mesh grille features a complex 3D geometry and smoked finish with copper highlights that identify the Bentley EXP 12 Speed 6e as a fully electric vehicle. When the car is running, the ‘6e’ logo illuminates in a striking, vibrant white. The twin bonnet scoops act as highly effective heat sinks that supply additional cooling to the battery and powertrain. The wing mirrors – which are cameras rather than traditional reflective glass – are exceptionally sleek and were inspired by the sculptural form of stealth aircraft fuselages.

The advanced Electrically Powered Compressor technology first used by Audi in the SQ7 TDI flexed its muscle in a TFSI petrol engine for the first time in the Audi Q8 sport concept. Demonstrating the vision Audi’s developers and designers have for the dynamic yet efficient SUV of tomorrow, the latest Q8 study combines its EPC with a six-cylinder TFSI and a mild hybrid system – a world first that enables it to deliver 476hp output with the efficiency of a four-cylinder equivalent. Augmented by the compressor and Mhev system, the 3.0 TFSI engine powers the Q8 sport concept from 0 to 100 km/h in just 4.7 seconds and keeps going until it reaches its top speed of over 270km/h.