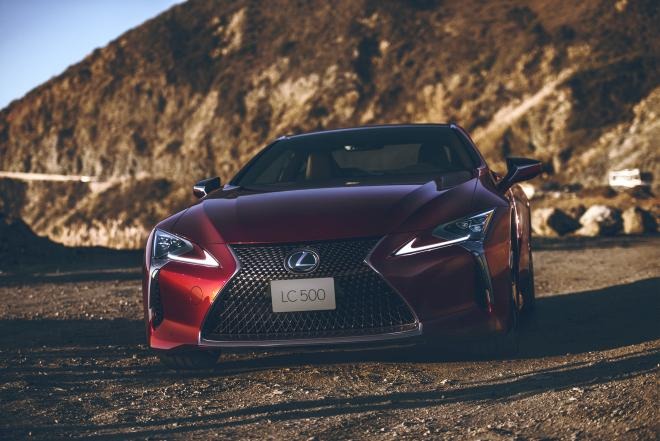 The emotional designs and high-performance models issued by Lexus in the last few years prefaced a new chapter for the brand, one that begins now with the arrival of the all-new 2018 Lexus LC flagship performance coupe. Available now at Al-Futtaim Motors, exclusive distributor of Lexus in the UAE, the LC combines sharp design with a promised blend of performance, comfort and premium craftsmanship to join an elite group of international GT cars.

Christopher Buxton, Managing Director of Lexus at Al-Futtaim Motors, explained what the introduction of the LC 500 in the Lexus line-up means for the brand. “Lexus has a strong heritage in the UAE, having been here for more than 25 years, and for the past seven years, we have been leading the charge when it comes to luxury hybrid motoring, as we continue to strive for a greener environment and more sustainable mobility. The LC 500 employs a unique multi-stage hybrid system that not only achieves powerful performance, but also offers a smooth drive that embodies the promise of the Lexus marque, offering a pleasurable driving experience which enhances the user’s lifestyle.”

Based on the design of the LF-LC concept car which was shown at the 2012 NAIAS, the Lexus LC debuted as a production model at the 2016 edition of NAIAS. Immediately identifiable as a Lexus thanks to its hallmark spindle grille and dynamic character lines, the 2018 LC represents the most passionate expression of the brand’s design direction. Independent L-shaped daytime running lights beneath new ultra-compact triple LED headlamps create the distinctive LC front lighting signature. The combination of a large glass panel and blacked-out rear pillars creates a floating roof appearance, and chrome-plated moldings along the edges, which echo the lines of a traditional Japanese sword, amplify the effect.

Under the hood, the LC 500 features a 5.0L NA V8 that makes 471hp (@ 7,100rpm) and 540Nm of torque (@ 4,800rpm). Power is sent to the rear wheels via a 10-speed torque converter automatic transmission, enabling the grand tourer to go from zero to 100km/h in less than 4.7 seconds. The LC 500h, on the other hand, teams the 3.5L V6 petrol engine with two electric motors/generators. The Multi Stage Hybrid System combines the Lexus hybrid system with variable gears. By controlling the output of both the V6 engine and the electric motor, it achieves a combined output of 354hp.

The cabin retains the understated sophistication of current Lexus cars; the low instrument panel position, together with the low hood line and narrow A pillars, give the low-seated driver a good view of the road. The instrument binnacle houses the latest version of the TFT display technology introduced in the Lexus LFA supercar, including a moving central ring. The Lexus LC comes in four distinctive interior colour schemes that include new Breezy Blue and Ochre, together with Dark Rose and Black seen in other Lexus models. The cockpit also continues the aural partnership with Mark Levinson, featuring a bespoke 13-speaker reference audio system.