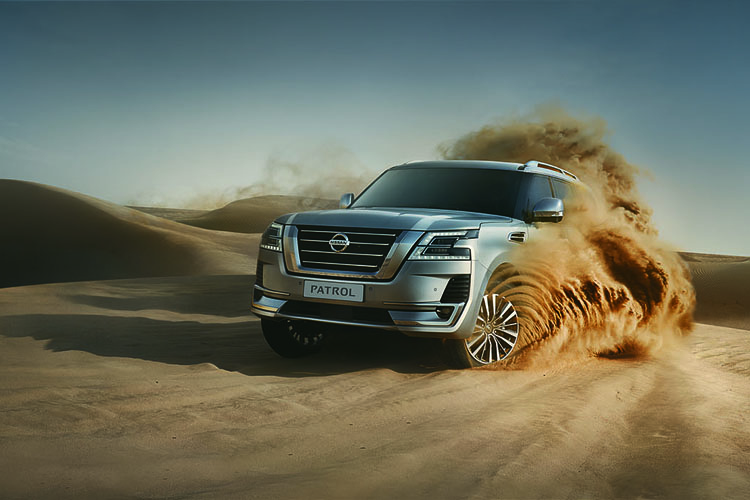 The Nissan Patrol is the icon of Nissan’s SUV heritage, loved by generations of loyal customers who have purchased about 1.9 million* since it debuted in 1951. Known for its durability, reliability, premium design, safety, comfort features and unmatched all-terrain performance, the Patrol remains the flagship of Nissan’s extensive 4×4 lineup. The car holds a special place in the hearts and minds of Middle Eastern customers who value performance even in the toughest of conditions, a key attribute of the Patrol.

“Patrol is one of our longest-standing and most cherished models with a long and proud heritage,” said Joni Paiva, regional vice-president, AMI region. “The new Nissan Patrol represents the peak of luxury and ultimate capability and will continue to provide authentic experiences to its loyal customers in the Middle East and around the world.”

Engineered to tackle the most demanding driving conditions on the planet, over the years the Nissan Patrol has more than earned its reputation. Patrol can provide the same outstanding level of comfort cruising on the highway or negotiating rocky mountain terrain.

The Patrol has established itself as one of the most capable vehicles around, with outstanding driving performance, best-in-class engines and advanced Hydraulic Body Motion Control. With that as a starting point for the new 2020 Patrol, Nissan took all of the aspects of a vehicle that already provided owners with top level comfort, safety and confidence behind the wheel – and made it ever better.

Thierry Sabbagh, Managing Director, Nissan Middle East said, “The story of Nissan Patrol in the Gulf dates to the very first iteration of this legendary four–wheel drive when it first appeared in Kuwait. It was the start of a love affair between the desert people of the Arabian Peninsula and the Patrol that exists, to this day. In a region steeped in tradition, yet steered by the future, it was only fitting to host the global launch of the new Patrol in the Middle East.”

The Patrol’s ruggedly stylish appearance and all-conquering performance has led the model to become an inseparable part of the social and cultural fabric of the Middle East. The iconic SUV’s popularity is ever-growing in the UAE. It continued segment domination with a 45.2 per cent market share in FY18 (GCC market share is 27%; GLF market share excluding KSA is 33%) and retains its position as a majority contributor to Nissan Patrol’s
global sales.

Signature design changes for the new Patrol include Nissan’s V-motion grille, interpreted in a new way for SUVs. Along with the new boomerang-shaped LED headlights, the redesigned grille highlights the Patrol’s strong, angular front. At the rear, the Patrol’s new taillights also sport the boomerang shape. They are seamlessly integrated along with a large chrome nameplate and sequential rear turn indicators, which have been added for the first time on a Nissan vehicle.

Inside, a new center console incorporates dual displays featuring Apple CarPlay and Android Auto. This ensures customers are always connected and can make the most of their smartphones. New diamond-stitch quilted leather seats with added padding provide a luxurious feel, as does the new hand-stitched steering wheel. Climate control and powered lumbar support are optionally available for the front seats.