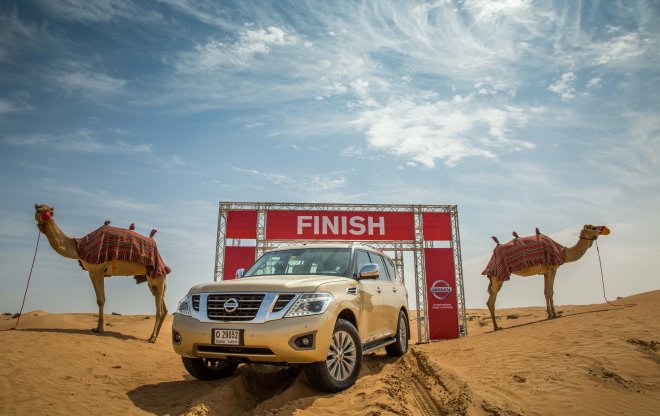 Nissan Middle East has announced a radical new concept which it claims will eventually revolutionise the way vehicles are evaluated for desert performance. Developed by Nissan engineers, “Desert Camel Power” uses a scientifically proven formula to determine how a given vehicle will perform in typical desert off-road conditions.

Nissan has created Desert Camel Power to help bring clarity to the endless discussions about the inherent off-road capabilities of SUVs in the Gulf market. Horsepower alone is not enough to perform well in desert conditions, but just as horsepower can be calculated scientifically, so can Desert Camel Power, thereby raising the prospect of an at-a-glance indication of a vehicle’s desert fitness.

“Over the past two years, we have been researching what elements make a vehicle such as the Nissan Patrol so well-suited to desert driving,” said Engineer Joseph Rachid El Hachem, Desert Camel Power Unit Engineer. “Basically, we found that it comes down to the interplay between the vehicle’s weight, its velocity and its trajectory. Other factors including manoeuvrability, engine torque and of course the skill of the driver do come into play and cannot be discounted. However, if we standardise a vehicle’s approach speed and trajectory in a given environment we can time how quickly it travels a set distance and subsequently factor in its weight to work out its Desert Camel Power.”

Samir Cherfan, Managing Director Nissan Middle East said: “In some ways, it is perhaps surprising that such a formula has not been developed before now, given the amount of time and energy the off-road community puts into making claims and counter-claims about what constitutes a good desert vehicle! However, it is typical of Nissan to tackle the issue head-on and take this ground-breaking first step. We are proud that the development work has focussed on Gulf countries. We are also confident that the concept will find widespread acceptance among both the leisure off-road community and those who live and work in areas where off-road capability in a vehicle is absolutely essential.”

Naturally, any unit of measurement requires a clear definition, which in the case of power outputs requires the development of a scientific mathematical formula. Nissan engineers got together scientists working in the field of metrology (the scientific study of measurement) to both define and find ways to measure Desert Camel Power using methods that are universally reproducible. It took time, effort, inspiration, and no lack of mathematical genius to come up with the formula which can be applied to any off-road vehicle, anywhere in the world that positions itself as being desert-capable. That formula can be rendered as:

The scientific paper resulting from this collaboration and the formula itself have been presented to ESMA (Emirates Authority for Standardization and Metrology) which has been highly receptive to the idea of this entirely new unit of measurement. ESMA is fully on board to undertake the requisite testing which will help to standardize the new unit, first on a regional and eventually on a global basis. Desert Camel Power will in future be used in all Nissan Middle East showrooms and marketing literature to define the desert capabilities Nissan’s SUV line-up.