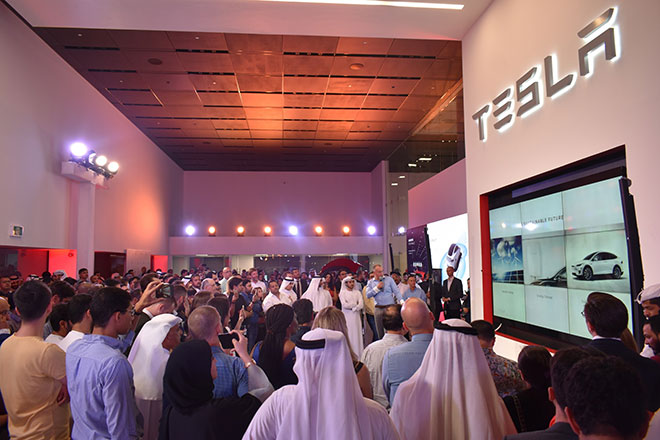 With both award-winning, all-electric Model S and Model X on show, the store will also include the Tesla design studio and the dual motor Model S rolling chassis. More than 3 million people worldwide visit Tesla retail stores every year to learn about electric vehicle technology in a low-pressure, educational environment. Customers in the UAE who wish to sign up for a test drive can do so at www.tesla.com.

Tesla announced its arrival in both the UAE and Jordan earlier this year, inviting customers to visit the online design studio and order the Tesla vehicle that best suits their lifestyle. First orders of Model S and Model X vehicles already arrived in the UAE in June 2017.

In addition to convenient home charging, Tesla has designed the most sophisticated electric vehicle charging network in the world, including Superchargers and Destination chargers, so owners can travel wherever and whenever they want. With two Supercharger sites in the UAE and three more planned by the end of the year, allowing drivers to recharge their vehicles in minutes rather than hours, Tesla also has 32 Destination Charging locations now available, with at least 18 more operational in the next six months.

With an industry-leading NEDC range of up to 632 km, Tesla’s award-winning Model S delivers exemplary performance through Tesla’s unique, all-electric powertrain and accelerates from 0 to 100 km/h in just 2.7 seconds. Model X SUV gets standard all-wheel drive and up to 565 km of range (NEDC) on a single charge, Model X fits an active lifestyle and includes ample seating for seven adults and all of their gear.