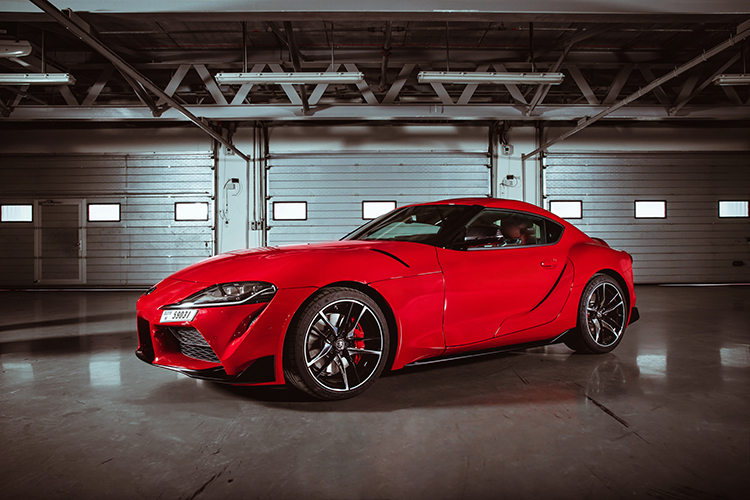 After a 17-year wait, Al-Futtaim Toyota has launched the new 2020 Toyota GR Supra in the UAE, much to the delight of fans and Supra loyalists across the country.

It’s been nearly two decades since Toyota stopped production of the previous fourth- generation Supra model. The car started in the market in 1978 and quickly earned a reputation as an unfailing sports car. It was in the 1990s, however, when the Supra encroached on territory normally reserved for the most expensive and most exotic supercars from Europe and the US. In its fourth-generation guise launched in 1993, the Supra punched above its weight and upset its more established competition, becoming a car cultural icon as well as a genuine movie star along the way, winning millions of fans around the world.

Toyota’s engineers and designers faced the challenge of developing an inevitable sequel to the legend, worthy of the automotive legacy that started way back in 1978 and that would surpass the legendary performance of the fourth generation Supra.

The 2020 Toyota Supra went through thousands of kilometres of performance testing to ensure it lives up to the heady expectations of some of the world’s most devoted enthusiasts. Chief Engineer Tetsuya Tada, who headed the vehicle’s development, said: “The history of Supra development is marked by the pursuit of driving pleasure created by the relationship between driver and car. The all-new GR Supra really reacts the way you want and feels good to drive. I can definitely say that the acceleration delivered by the GR Supra’s straight-six turbocharged engine feels truly exhilarating. The solid torque it provides continuously elevates the acceleration feel to a sublime level. Once people have experienced that feeling, even those who don’t know or who have forgotten about the fun of driving a car will think, ‘That feels amazing!’”

The new 2020 Toyota Supra stays true to its front-engined, rear-wheel-drive layout which set it apart all these years, not forgetting of course the heart of the beast – a longitudinally-mounted in-line turbocharged six-cylinder engine, displacing 3.0-litres and delivering 335 horsepower and 50.99kg-m of torque to the grippy rear tyres, mounted on lightweight, forged aluminium 19-inch wheels.

In ultimate GR Supra specification, Toyota’s flagship sports car benefits from the experience of the Japanese manufacturer’s in-house racing department, Gazoo Racing (GR), which has competed at the Nurburgring since 2007. Since then, all the knowledge and expertise built up over the years has been funnelled into the production of the new 2020 GR Supra.

The new GR Supra accelerates from zero to 100km/h in 4.3 seconds and has a top speed of 250km/h. With an eight-speed transmission and instant shifts from the sports-orientated calibration, drivers can snap at their own gears with the steering-mounted paddle shifts during spirited drives or leave the car to do things automatically when out on a cruise.

At a closer look, the new Supra draws inspiration from Toyota’s classic 200GT ‘James Bond’ car. Embodying the overall race-bred design, the compact, taut proportions make the body appear wrapped over the large wheels, with minimal overhangs front and rear so as not to visually weigh down the car. A long bonnet and a cab-back driving position so reminiscent of past Supras is also present, as is the sloping bonnet and curvaceous fenders converging into the signature headlamps.

Other exterior details as standard on the 2020 GR Supra include a dual sports exhaust, adaptive LED lights, smart keyless entry and body-coloured details.

“With the 2020 Supra, a real automotive icon has finally returned and we know enthusiasts around the nation will be blown away by its performance which simply feeds your desire to just get in and drive,” said Saud Abbasi, Managing Director of Al-Futtaim Toyota.

“Although it’s been a long time coming, the new Toyota GR Supra is all the better for it. Our patience has paid off with a car that’s capable of taking on the very best and yet appeals to enthusiasts with its unprecedented combination of power, beauty and technology, not to mention safety,”