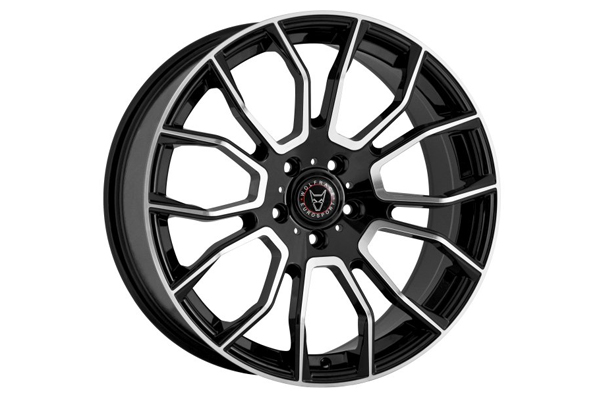 With the Evoke, Wolfrace has managed to pen an alloy that is both convex and concave. This has been achieved through seven sets of polished spokes which protrude from the rim edge before plunging aggressively back into the centre of all wheel, thus creating an inner concave profile.

Not only does the Evoke look the part, it’s been developed to be a truly open-ended wheel design. In practice, this means that it’s available in an impressive selection of finishes and PCDs, large enough to cater to most larger cars and to most tastes. The Evoke is intended to fill the capacious arches of big, executive cars, four-wheel drives and vans so it follows that its size, a meaty 8.5×20in all round, reflects this. The full list of PCD options is equally aggressive and runs to 5×110, 5×108, 5×108, 5×112, 5×114.3 and 5×120.

This year sees the Evoke debuts in its signature finish, a suitably menacing combination of black with polished highlights, with further colour combinations in slated for release in the coming months. The 5-stud Evoke will soon be joined by a 6×130 PCD sibling called the Evoke X, available in new Urban Chrome, Gloss Black, Black/Polished or Gunmetal/Polished finishes.